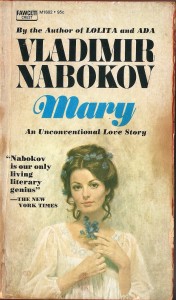 “The cradle rocks above an abyss, and common sense tells us that our existence is but a brief crack of light between two eternities of darkness.” With these words opens ‘Speak Memory’ (1947), Nabokovs preliminary autobiography, and it is in the spirit of this consideration that he gave birth to his first novel Mashenka.

The debut starts off in the dark, in a faltering elevator, and ends in the dark, where the protagonist Ganin falls asleep “his face buried in the folds of his mackinthosh, hanging from a hook above the wooden seat.” End of show. In between these two episodes a story takes place amidst a group of Russian émigrés in a Berlin pension. Alfyorov is one of the guests, a trite character with a yellow goatee who is exited because of the long awaited  return of his pretty little wife. Ganin, in everything his counterpart, with his pale face and haughty demeanour, sees the photograph that Alfyorov is passing around and – perplexed – concludes that this woman is actually Mashenka, the love of his youth! He sheds off his lethargic state, plans to elope with her as soon as she will arrive in Berlin and intoxicates Alfyorov the night before with wodka to prevent being bothered by the chap. However, quite unexpectedly Ganin takes the train to France and disparages pretty Mashenka. Where does this anti-climax comes from?

Most assuredly not from Nabokovs rookie-status as a writer, which the members of Goodreads* so eagerly, too eagerly stress. If the framework of the novel happens to be shaky, it’s because of the endless trains that keep rattling underneath the Berlin pension. Their wisps of smoke introduce a leitmotiv that manifests itself as mist, haze and cloudiness. Even the protagonist is infected. Ganin doesn’t have “a precise desire” and he suffers from “dispersion of the will”: he lacks a firm outline. On page 35** he experiences how the twilight penetrates his body, “transforming his blood into fog” and “turning the furniture into clouds”. But long before that he was already fading away. In Berlin he had sold his shadow, as a movie extra on a set, and some time later he recognizes himself on the bluish-gray screen of the cinema, ghostlike, “merged into the kaleidoscope of other figures” and sad Ganin felt “the fleeting evanescence of human life”.

Impassive Ganin calls himself ‘a cloud in trousers’, after the famous poem of Mayakovski (1915). Nabokov borrows this image to characterize a man whose veins are filled with mist, but he does not stop at that psychosomatic fading. The beauty of Mashenka is that Nabokov uses three ‘unsubstantial’ registers to shroud his novel in. The first register describes Ganins depressive state of mind, and possibly also expresses Nabokov own view on pre-war Berlin with its murky mornings and milk-coloured skies.*** Ganins cloudiness is a sombre version of the comfortable osmosis that takes place in the story Torpid smoke (1935), where Nabokov writes about the dissolution of Grisha, who is lying on the floor like a mummy, unable to move a single joint as the shape of his being no longer has any outline: “For example, the lane on the other side of the house might be his own arm, while the long skeletal cloud that stretched across the whole sky with a chill of stars in the east might be his backbone.” Here too the protagonist is spineless and, you might say, defleshed.

The second register evokes, from page 136 onwards, the gloominess at the party that is organized in the pension to celebrate the farewell of Ganin and the elderly poet Podtyagin. In the very first sentence Nabokov speaks of “ghostly shoulders […] heaving mountains of smoke” when a train passes. We read about “a black shadow”, black people “disappearing into shadows” and “an elegant black shadow” a few lines further on. Then there is a triple bleakness (“pale unearthly light”, “pale and morose”, “pale white wine”) and all these morbid shades are used to announce the death of Podtyagin, who has been fighting against his downfall during the previous chapters and does not succeed in fleeing from Berlin, as Ganin will. (Cruel joke by Nabokov: when the old bard has finally received his visa, he absent-mindedly leaves it behind in a streetcar.)

And then there is a third register, with vaseline-like qualifications such as “milky-white pale green”, “hazy sunshine”, “melting blue glitter”, “dusty white”. Together they paint a “soft, smoky-blue, rather airless picture” where the familiar lack of outlines is now described with an “elusiveness of boundaries”, where things are “dusty” and “dreamy” in the “night haze”. It’s like losing your contact lenses! This jump to the south, from hell tot paradise, contains Ganins feverish memories of the Krim, where he served as a young soldier. Nabokov conjures up a fata morgana that vibrates for a short while in mid-air and disappears as quickly as it was ‘materialized’.

After these elaborate descriptions of haziness and low hanging clouds there is a sharp contrast with the awoken, energetic Ganin, briskly walking through a sunny Berlin, being reflected in every mirror he passes (page 56). The mist is evaporated, the imagery is wiped clean. “He was a god, re-creating a world that had perished.” In his mind, nostalgic Ganin starts resurrecting Mashenka as if she were a statue fallen from its pedestal, watchfully walking through the labyrinth of memory, now and then “turning back for some forgotten piece of trivia.” And it is precisely this unassuming clause that should make the reader watchful as well.

The world Ganin recreates is, as always with Nabokov, that of prerevolutionary Russia, where the infatuated youngster rides his bicycle through the rains of spring towards Mashenka. Twice a tyre is punctured, but Ganin in unstoppable. At last he joins Mashenka in the dark park and he kisses her marble breasts, for prudish they are not, in 1926, the author nor the young lady, who exclaims on page 109: “I’m yours”, she said, “do what you like with me.” No premature cheering, dear reader, because something very strange is about to happen. Here, under the lindens of the park, he “grew to love her more poignantly than before and fell out of love for her forever.” How mysterious is that? Falling in and out of love almost simultanuously?

So, he must make her his, on a cold slab of stone between bushes filled with odd rustling sounds. Ganin is distracted, his knees hurt, he can’t perform like this. Mashenka sighs (not of excitement), gets up and straightens her dress. In the moonlit night they walk to the gates of the park and then something happens that will be of great importance later on. Mashenka stoops and picks up a limpyrid from the ground. In a quaint parody of a village lass, as Nabokov calls it, she grins and says: “Bless me, if it isn’t simply a cold little worm.”

There it is, the forgotten trivia! Not only the amorous spell is broken, but also Ganins manhood is mocked. Nabokov has always ridiculed Freudian interpretations and explicitly writes in the forword of Mashenka that one is not supposed to turn the word ‘orange’ into the anagram ‘organe’, but perhaps he is giving us a hint in the right direction? Ganin has not been able to deflower Mashenka and his glowing member has shriveled into “a cold little worm”.

More important than this humiliation is the coarseness of Mashenka’s commentary. The former fairy has become a farm girl. Ganin is all the more sobered after rereading the five letters she sent him years ago. In one of these letters she writes how “boring, boring” her life is and that there was only a little bit of fun thanks to an amusing man with a yellow goatee, who we recognize immediately as Ganin’s boorish neighbour Alfyorov. Mashenka quotes lines from a poem written by someone called Podtyaghin, sentimental stuff about moonlight and reflections on the water. “How strange, mused Ganin. If someone had told me then I should meet him, of all people.”

On the very last page of he book Ganin realizes that he has exhausted his memories and that both Mashenka and Podtyagin will remain in the “house of ghosts”, where he too lived for a long time. In this sense Nabokovs debut is a classic Entwicklungsroman: the hero unmasks the fairy and the poet and develops the necessary ‘substance’ to move on in life. Ganin left, not sadder but wiser, and never saw his girl again.

**At the 8th of november 2014 I visited a book market in the St. Bavo (Haarlem, Netherlands) and paid four euros for a hideous edition:  Fawcett Crest-pocket M1602: Mary – An Unconventional Love Story by the Author of LOLITA and ADA. It contains an English translation by Michael Glenny (1970) of Nabokovs first novel Mashenka, which he published under the penname Sirin at Slovo in Berlin, 1926.

***See page 117 in ‘Letters to Véra’, Penguin Classics, 2014. “The squalid vileness, the coarse tiresomeness of Berlin, the aftertaste of rotten sausage, and the smug ugliness.”

****Zie bijvoorbeeld blz. 117 in ‘Letters to Véra’, Penguin Classics, 2014. “The squalid vileness, the coarse tiresomeness of Berlin, the aftertaste of rotten sausage, and the smug ugliness.”