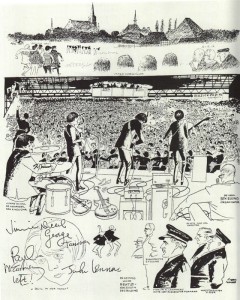 Reportage Drawing, Graphic Journalism, Observational Cartooning and Documentary Illustration: all these terms are used to describe journalistic projects where the comic or graphic artist acts as reporter. Each of these names refers to specific angles and techniques, but what they have in common is their (relative) simplicity: the world reduced to lines on paper. Before the invention of photography illustrations were quite common in the printed press –  early in the 17th century woodprints were reproduced in the Belgian newspaper Nieuwen Tijdinghen, and Harper’s Magazine refined the art of illustration in the 19th century – but later on they became obsolete; only the editorial cartoon remained in fashion. In the nineties of the last century however the drawing returned to the press, when the American artist & journalist Joe Sacco invented a new genre and started to publish comics about the victims of the Palestinian and Bosnian war zones. Today he is an internationally acclaimed reporter with followers in many countries, but Sacco could not have developed this journalistic genre without the help of Art Spiegelman, who had the courage to use the comics format for a dramatic narration about the Holocaust and it’s rare survivors. It was his two volumed ‘Maus’ that proved to the world that combining a light hearted idiom with a serious content is perfectly possible. Amongst his offspring we now find people like Jérémie Dres, a French artist who explored the roots of his Jewish family in Poland, and digested his experiences in the graphic reportage ‘We won’t see Auschwitz’ (2011). Dres shows that journalism, literature and comic art have been enriched by a new form of storytelling that contains both visual sophistication and factual depth.

Considering the specific qualities and idiosyncrasies of the genre (if we can call it thus, because it’s manifestations are manifold), there are a number of issues to be addressed, concerning a) the eye of the beholder, b) the use of metaphor, and c) the relevance of objectivity and subjectivity. One of the main characteristics of the drawn documentary is the role of the artist as a personage in the story itself. Sacco cum suis – Chapatte in Switzerland, Guy Delisle in Canada, Jeroen Janssen in Belgium – make a habit of placing themselves inside the historical scene they are portraying, which is actually a form of falsification and fabulation as it is physically impossible to observe yourself from the outside. A fictional representation of the journalist is added to the factual environment, with a double purpose: to make clear that the artist was really there (the wall of Jerusalem, the Occupy-camp in Oklahoma, the slums of Rio) and to provide the reader with a point of identification. The graphic journalist guides the reader through the scenery and shows him where to look and listen. He is the beholder, but his eyes are not fixed in one place: when you study the pages where Guy Delisle walks through the orthodox neighbourhood of Jerusalem, you discover that his eyes are everywhere, in the sky above the city, right behind Jews in their black coats heading for the synagogue, or right behind his own back when he has conjured himself into the narrative.

This recipe is not used by every graphic journalist, however. Someone like Olivier Kugler from Germany leaves himself out of the story and presents the reader with a rich tableau of the places he has visited, combining bits of dialogue that float across the printed page with multilayered drawings that invite the reader to take a close (closer, come closer!) look at his reportage. In order to make a coherent thing of it all, the reader absolutely needs some synthesizing capacities. Kuglers style is poetic and impressionistic, where Sacco’s version is descriptive and sometimes expressionistic, especially where he uses extreme kinds of typography to mirror the atmosphere (drunken people in a nightclub).

A comic artist is something like a wizzard: with his pencils, talent and imagination he can conjure up anything he likes, without having to finance expensive engineers for computed generated imaging. Interestingly, this cheap opportunity to visualize things that do not really exist is also useful for graphic journalism. For example, Nathan Huang composed an episode for the series ‘Cartoline da…’ in the Italian magazine Internazionale. His short piece is about the unbearable traffic of Los Angeles, which made him move to New York; he prefers the smells and rudeness of the subway to the imprisonment of the traffic jams and conveys this by replacing – in his comic – the fuming automobiles by iron cages and freeing himself from one of these cages, after which he happily steps down to the underground train. All this happens within the span of four panels! In a written or filmed piece of journalism this kind of metaphor would be much more difficult to use. Mazen Kerbaj, drawing and describing his agonies during the short war between Israel and his Lebanon in 2006, included a page on which the artist is having a conversation with his brain (!), that is lying on the table before him. With this brain he discusses whether the war is finally over or not at all, so Kerbaj externalizes a internal process that would otherwise not have been visible to the reader. Apart from inventing a new variety of the monologue intérieure, Kerbaj also introduces a sense of humour into his war-journalism, a little souvenir from the days that comics were only comical.

Graphic journalism is slow journalism, as I have written earlier (in the Dutch newspaper De Volkskrant). Citizen journalism on the other hand, working with mobile phones and the social media, works with the speed of light. The effects of these two new means of reporting are absolute contrasts. Anyone choosing ink and paper as tools for eternalizing newsworthy developments, must be acutely aware of the slowness of his medium, because the sketches must first be reworked into readable comic strips, with text and data added in order to produce something that deserves to be called reportage drawing. That this takes time is an advantage, however, because it forces the artist to rethink the things he has witnessed, to refine his judgement and to select only the strongest and most relevant images. The slow journalist filters the news and his work is inherently subjective. In the preface of his anthology ‘Journalism’, teasingly called ‘A Manifesto Anyone?’, Sacco writes the following: “Aren’t drawings by their very nature subjective? The answer to this last question is yes…” And he adds: “The comics medium is adamant and forces me to make choices. In my vision that is part of the message.”

For many graphic journalists the famous neutrality of the conventional reporter, his objectivity, is not something to strive for at all. In 1947 Jean-Paul Sartre published his book Qu’est-ce que la literature? in which he proclaims that passivity is equivalent to activity and that a socially responsible writer must address the major events of the era. That is precisely what graphic journalists do; Sara Glidden in Syria, Susie Cagle in the United States and Victoria Lomasko in Russia are activists, as well as artists. They want to share with us what they saw, but also what they felt, theirengagement must convince and inspire us to take action or, at least, to shed our indifference. In her book ‘How to Understand Israel in 60 Days or Less’ Glidden included a drawing of herself crying hot tears after witnessing too many emotionally charged scenes. A journalist showing her distress: that is an impressive sight in itself.

Underneath this subjectivity in the drawn reportage lies a firm fundament of proof and evidence, as there must be, because without it we would be dealing with mere pieces of propaganda. “A growing number of artists and writers are creating reported, researched, factual work these days,” Rob Walker wrote in The New York Times. But how is this factual work represented? The most frequently used tool is the map, which is an abstract representation of the area portrayed: Ted Rall shows a map of Afghanistan, Gihén ben Mahmoud shows a map of he Arab Spring, Cagle shows a map of American states where medicinal marihuana is available. The artists draw these maps in their own signature-style, in their own handwriting you could say, appropriating the alien thing to fit into their habitat. Another tool that bridges the span between objectivity and subjectivity is the photographic image, that artists use in many different ways. Chapatte for example often begins his reportage with a photographic portrait of an interviewee and then softens this image into a drawing. He says: if you see a photo of a child dying in Gaza, you can hardly look at it, because the image is too confronting. But if you make a drawing of the same situation, the viewer is able to watch closer and get a better understanding. In the three volumes of ‘The photographer’ by Lemercier, Lefèvre and Guibert, about life in the mountainous areas of Afghanistan, photographic and drawn images are juxtaposed: the photos shows things as they were, the drawings express how the people felt and what they thought. Description and interpretation stand side by side and the reader is invited to integrate the best of both worlds.

Other examples of documentation in graphic journalism can be: the echography shown in Marisa Acocella Marchetto’s book ‘Chemogirl’ that is evidence of her cancer, the Facebook-pages reprinted in Josh Neufeld’s reportage ‘Bahrain: Lines in Ink,  Lines in the Sand’, or the official license for biological farming (no. 3942/1998) depicted in Ėtienne Davodeau’s ‘Rural! – Chronique d’une collision politique’. In all these instances the journalistic solidity of the story is based on retracable sources: if you don’t believe it at first sight, you can check it for yourself.

Reknown newspapers and magazines like Time, Folha de Sāo Paolo, Internazionale, Süddeutsche Zeitung, De Morgen, XXI and The Guardian send comics artists as eye witnesses to hot spots, after which they share their impressions with us, readers and onlookers, in the form of lines on paper. Or lines on screen, because last year the tablet magazine Symbolia was launched in the US, specialized in illustrated journalism for the iPad. Chief editor Erin Polgreen says that comics bring whimsy and curiosity to journalism: “I want the news to be more beautiful.”  From both the Netherlands and the US an important online platform for comics journalism and political cartooning is being hosted, called The Cartoon Movement, that collects more than sixty graphic documentaries. One of the most extreme examples of what is possible in the digital range, is Dan Archers interactive comic ‘The Nisoor Square Shootings’, about the killing of 17 Iraqi civilians in 2007 by a Blackwater convoy. Not only does Archer recount the tragedy in a series of comic panels, but these are linked to an animation of the convoy vehicles as they move over a photographic image of Nisoor Square. Click and shiver. Here, several means of expression & information are integrated into one piece of art. Take a peek at www.cartoonmovement.com.

Joost Pollmann lectured on graphic journalism on the 28 may 2013 at the Staatliche Akademie der Bildenden Künste in Stuttgart: ‘Witnessing the world with pen and paper’. Illustration: the Dutch cartoonist Eppo Doeve made many drawn reportages in the sixties. Here he reported about the Beatles in Holland, 1964.